Comments: Back to baseline setup after last week’s pan hard failure/DNF. New setup is in car and we’ve got to dial it in. We missed our first practice due to a problem with shifter (after transmission change mid-week). Our only practice was pretty good, but the car had a different character with chassis changes. Heat race was OK except for initial start when the car didn’t want to turn coming out of turn 4 so that put Rob in a position where he had to work from 3rd place. The top 3 cars checked out and Rob was actually fastest of all cars in race trim during the heat races with a 14.436 lack to edge out the 6 of Gada who was 2nd quickest.

Feature race should be interesting with the 22 on the pole again and the 9 outside pole. Diego is in his brother’s 31 chassis starting 3rd and he was quick during practice but not very fast during heat race. Hope he picks up steam for the feature.

Feature started out OK as the car was good and Rob got up to 2nd quickly and had a 8 car length lead before the first caution came with 31 laps to go. Started outside in 2nd but the same thing happened with the handling – car didn’t want to turn….but it worked out OK as Rob powered back on the outside to clear the 3rd place 22 car and he got back into his groove chasing down the 31 of Monahan. Next caution came with 20 laps to go when the 88, 47 and others wrecked on the front chute and no change as Rob was still 2nd. Race ran green from there to the checkered and the 31 was just too fast and our setup was a tad snug for race conditions.

We’ve got something to build off of since after the race, we learned that Rob was quickest tonight….but just not quick enough. 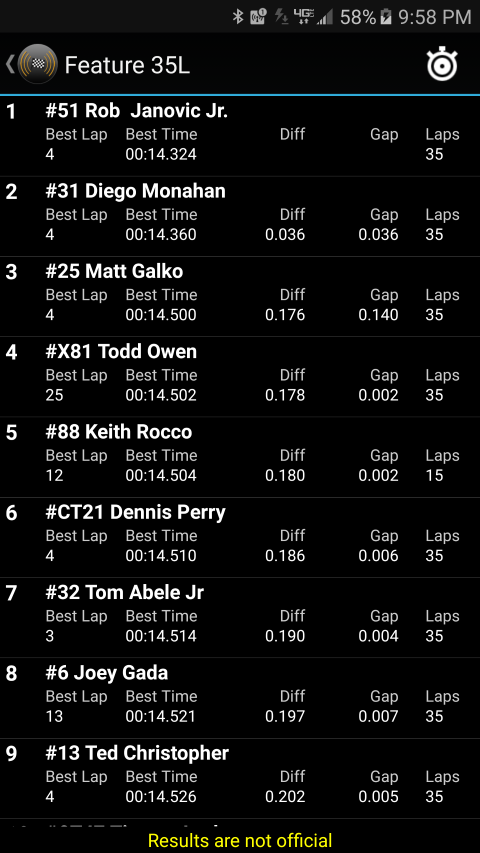