Comments: Wow….the following is a rare statement I haven’t heard in a long time from Rob…. “best handling car I’ve ever felt”. Looks the the reversion chassis changes are what the chassis needed. Track is fast and Rob is 2nd quickest to 88 of Rocco (who’s currently just 1 point out of the National Championship position): 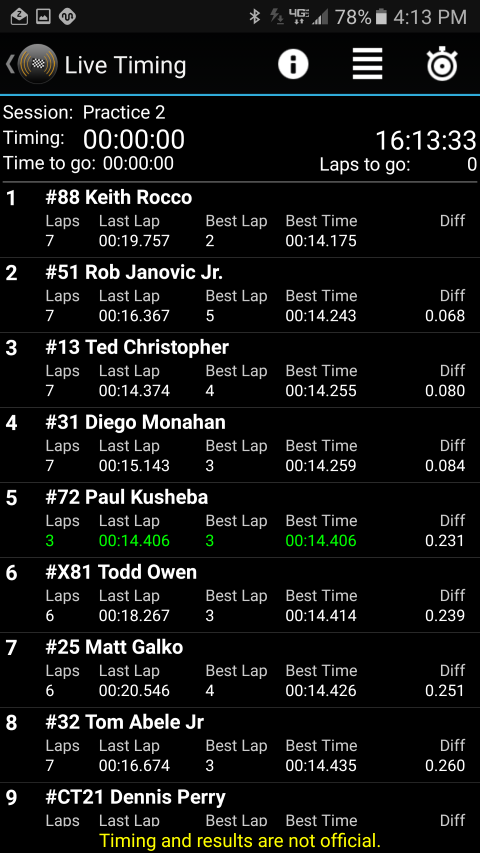 a) leader breaking loose on his own coming out of turn 4 (as Rob was making an inside pass) and with his left rear tire going down then he spun in front of the field – Rob went to the infield to avoid him. After race 22 came over and apologized for tire going down.

b) After restarting in the rear with 8 laps to go, Rob racing from the rear gets inside advantage on 98 going into turn 3 and 98 spotter must not have called for car inside. 98 spun and we were black flagged!

After the race we questioned the call when an official, Chris Williams, was driving by our pit stall. He said “you dive bombed the 98 going into turn 3”. He had the gall to then say “it’s always like this when we make a call against you guys”. I was shocked by the statement and then asked “when was the last time we questioned a call made by the officials?”…. Williams then responds ” last year”.  I was thinking OMG, that’s the silliest thing I’ve ever heard. Joke is the team of 7 officials got it wrong while even the announcer got it right when he called out on the PA the left rear tire was obviously going down on the 22 Erin.

1st crap call they tried to make us go to the rear (but Rob avoiding any contact and going into the infield took care of that) . The 2nd crap call to throw the black flag forcing 51 to start in the rear certifies the incompetence of the current officiating crew in MY mind! I know bad calls happen and we normally suck it up without complaining, but this time warranted a chat and to get attitude back is disappointing to say the least. When I asked many experience drivers, crew members and even media people about when the last time they ever saw a black flag for a racing incident (not mechanical issue) and not one could say they ever saw that happen. Instead, they customary action taken if the contact is deemed rough riding is to score or send the offending driver at the rear of the qualifying event, not black flag making them start at the rear of the field.

Had to be one of the worst SK features of the year with countless caution laps. At least the car is in one piece and we can come back next Saturday for our last Saturday night show of the season (finale race is in October).