Comments: Wow…car was outstanding in practice and we tied the 13 by turning a 14.162 second lap which is quick time for the day so far. 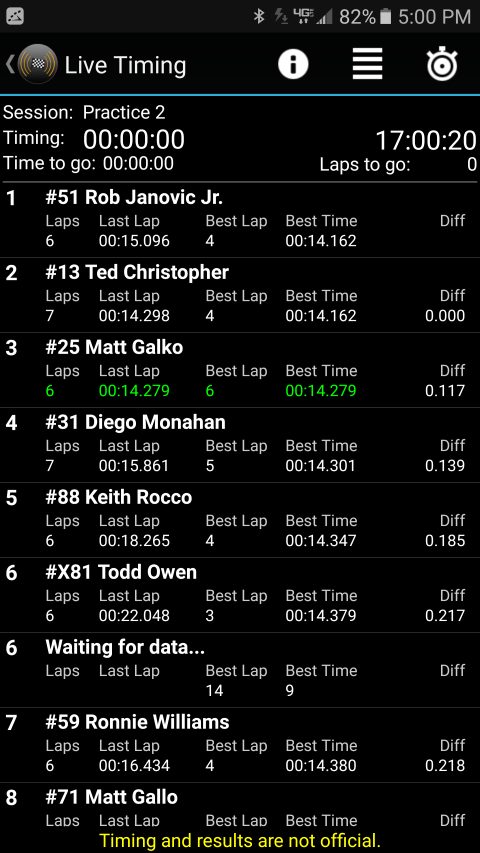 Heat race we’re starting 3rd behind the 22 and the 32 (outside pole) and 31 of Monahan to the outside will make the heat race a challenge.

Heat race was uneventful and Rob settled into 3rd to save tires for the feature.

Feature started out with a quick caution just 1 lap complete and Rob restarted 6th. Next caution came with 32 laps to go and Rob restarted 5th. The 22 was coming backwards from his pole starting position. 1 lap later Rob was inside the 22 who was coming backwards on the outside and he turned hard left going into turn 3 despite Rob having a wheel inside. Either he ignored his spotter OR she just didn’t make the call. Rob was sent to the rear as an involved car so he pitted to tighten the car up a tad.

Next caution came with 21 laps to go and Rob was up to 13th and making great headway/moves through traffic. Next caution came with 7 laps to go and the 94 was being his usual menace blocking traffic. The guy just can’t pick a lane!! Then we had the 22 of Gunning still losing his mind over the earlier incident and then he got tossed by the officials. Another caution came just 1 lap later and Rob restarted 10th. With 2 laps to go there was a final caution and Rob restarted 7th. Some minor rear tin damage, but other than that, we’re bringing the car home in one piece. Next race is the season finale race Sunday Oct. 23rd!
Here’s Sid’s view of the race: